They are the 1% of real estate, which only the wealthiest can afford. And we do mean the wealthiest. Most of us wouldn’t live in them even if we could afford to. We’d need a battalion of servants on hand. The cost of maintaining these haciendas would probably buy a small suburb. We’re talking about Australia’s most expensive homes. Naturally, they’re to be found in our most upscale neighbourhoods, sitting like the pride of the block. Every state has them, and usually, they’re situated in the best quarters of our major cities. Trophy houses are a curiosity that we’re sort of glad we don’t own. We’d settle for a 7-day stay and happily return home. But people do buy them and even live in them. And better them than us, because sometimes the finest things are a burden. Without a drop of envy, we check out Australia’s most expensive homes.

However, we’re taking a detour from the precise list of the most expensive homes as they’re nearly all in Vaucluse. We’d have to investigate NSW’s most expensive homes exclusively. We’re keen to find out what’s busting banks Australia-wide. This is a state-by-state tour of the grandest designs and best homes and gardens this country has to offer. This last tier of property might seem like the stuff of dreams to us. Yet, it would no doubt only grudgingly impress a rube like Bill Gates. From the top-end to Hobart, splendid homes abound. They may differ in price due to their location, but their magnificence is not restricted to their sales price. After all, beauty is in the eye of the beholder. Nevertheless, these sumptuous abodes do Australia proud. They cost tens of millions of dollars or a paltry few million. They’re the jewels in our glorious, sunburnt crown. 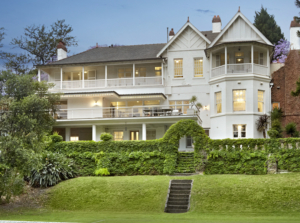 Point Piper is a small harbourside suburb in the exclusive Municipality of Woolhara, as well as Australia’s most expensive area. But then so is much of Sydney’s eastern suburbs, so you can guess its quality. Meanwhile, Wolseley Road is Australia’s most prestigious address. It’s not just the ritziest street in Oz but ranks as the 8th most expensive street in the world. Federation Arts buildings sit alongside Craft cottages, imposing mansions, and high-end apartment blocks. Adjoining that road is New South Head Road, on which sits Fairfax Manor, Fairmont, Fairwater, and Elaine. It’s known as all four. Owned by the Fairfax family, who were stupendously wealthy media proprietors, it was sold in 2018. The Arts and Crafts style mansion was built in 1863. Bought by James Fairfax in 1909, it bounced around the family for generations. Finally, it ended up with Lady Mary Fairfax OBE. She checked out in 2017.

Following the death of Lady Fairfax, the heritage-listed house was bought in 2018 by Mike Cannon-Brookes. He dropped $100m on the stately three-storey digs (plus millions in stamp duty). Cannon-Brookes made his mint through the software company Atlassian and was out to impress the missus. Sitting on 600 square metres, with a lawn sloping down to Seven Shilling Beach, Fairwater is a decorator’s challenge. There’s a veritable botanic garden with four distinct varieties of trees and horse stables. Heaven knows how many bedrooms it has, but we’ll assume a lot. There’s a swimming pool, a tennis court, and, above all, history in spades. In its day, Fairwater hosted fame and royalty. Nowadays, it’s a bit of a dump if you ask us. Seriously, how liveable can a museum be, especially when its heritage listing hampers your freedom to renovate? Nevertheless, it’s Australia’s most expensive home. 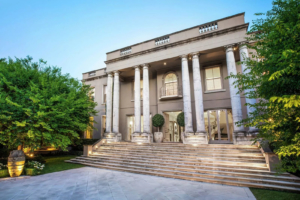 Victoria has splendid houses. Judging by the price tag, none are so regal as those in Toorak. Ah, Toorak. It’s the snobbiest suburb in the Garden State. Only the well-heeled need apply. It’s second only to Point Piper in NSW in terms of residents’ combined incomes. It boasts several surviving large 19th-century mansions, giving it a slight Salem’s Lot vibe. One of those is Victoria’s most expensive home, 47 Lansell Road. The priciest house ever sold at auction in Australia, No. 47, sits on 3300 sq m of choice Toorak acreage. With five bedrooms, four bathrooms, and a garage for six of the suavest sports cars, it transcends its smug surroundings. On the luxury side, it has three kitchens, one of which is commercial. We’re unsure if the chef came with the deal. Additionally, there’s a gym, an indoor cinema, a massage room, a tennis court, a pool, and more! 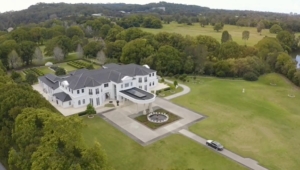 Queensland’s gold coast is paved in gold. It’s a rich, pineapple gold with tints of tinsel and tackiness. We’re only teasing. Head on down to the Gold Coast and you’ll think you’re in Miami. Tony Montana is sure to be lurking about somewhere. The average mansion around these parts resembles his hacienda in Scarface. Many of its sprawling villas are stuck in the 1980s. That’s why we came up with the wisecrack about “tacky.” But each to their own, eh. Nevertheless, with an asking price of $33m, there’s something gaudy about Bellagio La Villa. It’s had plenty of media exposure but still hasn’t sold. Also, it’s not the highest priced pad on the Gold Coast. Others are stalled on the market too, one with an asking price of $50m. Yet, the consensus hands the title to this palatial estate in Australia’s answer to Beverly Hills.

Frankly, Bellagio La Villa may be priced like a palace, but the comparison ends there. It’s strictly for nabobs. Which explains why a rich Chinese billionaire bought it. Doubtless, he wishes he was a communist again since he can’t wait to get rid of the monstrosity. Because it’s enough to turn a decorator pale. Sprawled over 490,000 square metres, the ten-bedroom property incorporates a porte-cochere entry and a million bedrooms. Perhaps not that many, but close. There are 10 bathrooms, polished marble floors, an admittedly majestic indoor swimming pool, an orchard, and a gardener’s residence. But the airport-length driveway is as sparse as a monk’s cell, lacking the welcome of a bucolic promenade. The white-washed exterior reminds one of a Mexican drug cartel’s lair. The quality improves from the property’s rear, with an azure fountain and an expansive garden. However, the interior is mondo bland. Again, that’s just our opinion. 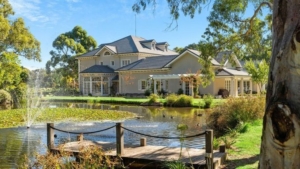 Adelaide is on the up as far as house prices go. It’s set to join Sydney and Melbourne, maybe not today, or tomorrow, but possibly the day after that. Anyone wanting chic urban luxury tens of millions cheaper might consider a move to the City of Churches. The most expensive home in that city is 489-500 Yatala Vale Rd, Yatala Vale. If you’ve got a spare $12 million in your jeans, you’ll get Toorak living for a bargain price. That’s if you consider $12 million a bargain. The one-of-a-kind estate goes by the moniker “Yathalia.” We dunno if it’s pronounced with a lisp, but possibly. Blending Romanesque with the French provincial periods, Yathalia preserves the dignity of yesteryear without being an impractical museum piece. It stands in quarters with botanical surroundings as impressive as the house. Overlooking a tranquil lake and nestled within a picturesque habitat it’s a truly beautiful homestead.

Ornate gates shrouded in rustic foliage invite the visitor down a leisurely white rose and tree driveway. The flora and fauna invoke a flawless mise en scene for the elegant manor. Although, in summer, it might attract mozzies. The house offers a stately 2,271 sqm of living space. One is received in a grand entrance hall with a spiral staircase. These sure-footed steps harmoniously divide the manor into separate wings, simultaneously open and private. The ceilings are coiffured and illuminated by oversized colonial-style windows that allow natural light and frame the verdant scenery. There are six bedrooms, four ensuites, four powder rooms, a lift, and an open-plan living and dining area. To add a touch of Downton Abbey, there’s a butler’s pantry, a wood-panelled library, and a billiards/games room. The latter has a built-in bar. It also features a formal dining area, a sitting room, and a three-car garage. 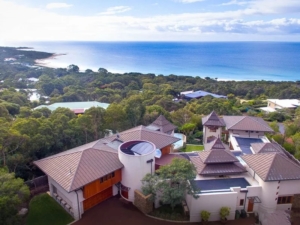 Perched on a hillside overlooking the Indian Ocean is the pride of WA, Jahangir. Once, that honour went to Allan Bond, and look what happened to him. This unique residence is named after an Indian emperor, and it’s fit for one. This exotic retreat has functioned as a very pricey holiday house, renting for $17,000 a week. Situated near the famed Margaret River wine region, it’s just three hours from Perth by car. Reflecting an Eastern motif, its emphasis is on “wellness.” And you’d have to be doing pretty damn well to afford it. It measures 870 sqm of internal living space and can accommodate ten adults. Nothing is tasteless about this slice of paradise, which incorporates lighted spacious rooms opening onto alfresco entertaining areas. There’s even a rooftop space for guests. A copper shingle roof sits atop a home theatre, an infinity pool, and every mod-con imaginable. 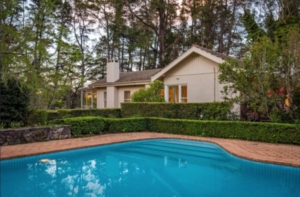 Canberra may be the nation’s capital, but judging by its most expensive homes, the rich prefer to live elsewhere. Yet, it’s Australia’s second most expensive city to buy a home. At $7.6 million, 6 Wickham Crescent is by no means cheap. This is fortunate because it’s not for everybody. It’s a scenic abode for cultured people. That rules out the multitude of sleazy politicians that inhabit the capital territory like debauched reptiles. It’s built on 8038 sqm of wooded land, so it’s somewhat bushfire risky. That aside, it’s probably the nicest home on the list. This house doesn’t strive for opulence but liveability and is peacefully infused with its environment. There are other, decidedly more modern designs in Canberra. But the quaintness of this dwelling is its winning charm. It’s an honest home with cosy bedrooms, an elegant dining area, an indoor spa pool and an outdoor pool. 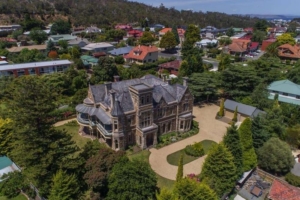 Stoke House could equally be known as Stoker House, as in the late Bram Stoker, the author of Dracula. The seclusion of the Apple Isle couldn’t be more pronounced than in this sensuous 1887 Gothic Revival mansion. Stoke House is constructed from the best sandstone imported from England and Scotland and is one of Tasmania’s largest mansions. A true novelty for the dedicated romantic, it inhabits 4,400 sqm of magnificent gardens while the house occupies just 1,025 sqm. It stands hunched and bat-like with its pointed towers and attic rooms. Stoke House is divided into three levels, including nine bedrooms, 11 fireplaces, a cellar, a tower room, and remote-controlled gates. The second floor has a minstrel gallery and a small galley kitchen. But it’s the architectural details that truly impress. Featuring Italian mosaic tilling, handcrafted timber fireplace mantels, a Waterford chandelier and blackwood staircases, it’s our favourite home by far.

Forgive us if we haven’t included anything from the Northern Territory, although there it has fine homes. However, nothing immediately matches our list. Putting that aside, Australia often suffers from cultural doubts. Given that architecture is the highest expression of culture, we have absolutely nothing to be self-conscious about. Our homes are among the best in the world, and our environment is clean and vibrant. Nevertheless, this is a wish list of the absolute best homes on offer. As we stated earlier, we don’t need anything so lavish to be happy. Some attractions are better visited than owned. This represents the highest end of the market. If you’re a more down-to-earth homeowner looking to sell, that’s where we can help. Perfect Agent will match you with the ideal real estate agent. We will ensure that you’re treated like a millionaire regardless of the scale of your home.